Sometimes a poem can be a simple thing, almost like a list.  Just string some thoughts together (in response to the prompts below), and and you will have a poem!

--What I could be doing instead of writing

--What I will do to make myself write

--What I will write about

--Why I will write

What I Could Be Doing Instead of Writing

Sleeping!  I could always be sleeping.  I could write an ode to pillows and sheets, a love poem to my bed.  (But then I wouldn’t be sleeping, I’d be writing.)

Play with the dog.

Play with the cat.

Play with the other cat (who is only a kitten, and needs playing with).

Cook and eat something.  Chocolate chip cookies, maybe, which would take a while, with creaming of butter and sugar and eggs and vanilla, and measuring and sifting flour and baking soda and salt, and stirring it all together and adding the chocolate chips (a few chips to eat right now), and scoop and measure and bake and eat while still warm.

Exercise.  Run outside?  Lift weights inside?  Yoga?  Cat and cow and cat and cow, and downward dog and plank.

Sit down and try to write.  Sit down, like Hemingway says, and “bite on the nail.”

Find myself writing after all.

What I Will Do To Make Myself Write

Set another early alarm, farther away.

Get up, stumble around, make coffee.

Keep handy a nice stack of yellow paper notepads (must be yellow paper, I don’t know why), and the good pens that I take from work, black ink only.

Don’t turn on the TV.  Or the radio.  Or the Internet.

Put words, any words, on paper.

Be kind (to myself).  Be patient (with myself).  But be stern (because I must be watched, I will sneak away if I can): we will write today.

What I Will Write About

Why I Will Write

Because I read.  Because books, to me, are everything.  And writers, therefore, are creators.  Are gods.

Because I always said I would (ever since I was seven).

Because I was once introduced as “the writer,” and I was so thrilled that I got goosebumps.

Because what we write will outreach us, will outlast us.

Because once I actually start on it, it feels so good.  Really.  Even getting this far, to this line, feels better than not getting here, by a lot.

So I WILL write.  I HAVE written!  I will write again. 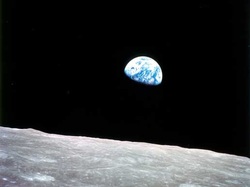 This prompt is a visual one, a photo with a great backstory.

On December 21, 1968, Apollo 8 became the first manned flight to leave Earth's orbit.  The crew took a photo, dubbed Earthrise, and also made a Christmas Eve television broadcast which was, at the time, the most watched television program ever.  The crew of Apollo 8 consisted of Commander Frank Borman, Command Module Pilot James Lovell and Lunar Module Pilot William Anders, and at the end of the broadcast they took turns reading from the Book of Genesis ("In the beginning, God created the heaven and the earth...").  Then Borman concluded with these words:

"And from the crew of Apollo 8, we close with good night, good luck, a Merry Christmas, and God bless all of you--all of you on the good Earth."

Look at this photo and another one below, called the Blue Marble, taken by the crew of Apollo 17 in December 1972. 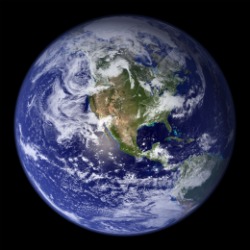 The prompt: consider the significance of a great first line, like those below (can you identify them?), and write your own great first line for a story, essay, play or poem that you can come back to write later (or not, no pressure!).

"In the beginning, God created the Heavens and the Earth."

“It was a bright cold day in April, and the clocks were striking thirteen.”

“It was a pleasure to burn.”

“In a hole in the ground there lived a hobbit.

“All happy families are alike; each unhappy family is unhappy in its own way.”

“You don’t know about me without you have read a book by the name of The Adventures of Tom Sawyer, but that ain’t no matter.

Or these lesser-known, but still great first lines:

“The monster showed up after midnight. As they do.”
--from A Monster Calls by Patrick Ness

“I’ve confessed to everything and I’d like to be hanged. Now, if you please.”
--from Chime by Franny Billingsley

“It has been sixty-four years since the president and the Consortium identified love as a disease, and forty-three since the scientists perfected a cure.”
--from Delirium by Lauren Oliver

“‘Where’s Papa going with that ax?’ said Fern to her mother as they were setting the table for breakfast.”
--from Charlotte's Web by E.B. White

“I am bit by fleas and plagued by family.”
--from Catherine, Called Birdy by Karen Cushman

“Mister and Missus Dursley of Number Four, Privet Drive, were proud to say that they were perfectly normal, thank you very much.”
--from Harry Potter and the Sorcerer's Stone by J.K. Rowling

Read the following poem and consider it as a character sketch.  Choose your own character, a real person, a fictional person, maybe yourself, and write a character sketch in poetic form.  (Hint: you can start a poem by making a list!  List details about the character's appearance, mannerisms, habits, then the setting you find the character in, maybe your interaction with the character, something the character says, either habitually or a one-time witticism or piece of wisdom, that is revealing of personality.  Then use the points you list to write complete sentences, then start to put the sentences together into stanzas, and you will begin to have a poem...)

And to the south lived dear old Mrs. Miller,
the first next door neighbor I really knew.
A doctor's widow. White-streaked, yellow hair.
With a nervous New York way of talking
though she'd lived out West for twenty years.

A grown daughter—Dorothy—lived with her,
worked somewhere, drove a red sports car.
Fruit trees grew behind their gabled house
and a crunching path of white crushed stone
ended at a Japanese-style fishpond.

I was tall enough then to climb the bamboo fence
and pull oranges from the tree that overhung
their pond. What fruit I couldn't reach, fell.
In January, you'd see lazy, blurred goldfish
tailing beneath navels floating on the pond.

Saturdays, I'd wash Mrs. Miller's Buick
with a bucket, soap and sponge. The fifteen cents
she paid was good money in '61. Later, on the lanai,
she'd pour my coke, wave away her cigarette smoke,
and engage me in grown-up conversation.

"Since nothing ever goes according to plan," she'd say,
"You'd think we'd figure out the plan."
I was at most eleven. She was a drunk, I suppose.
Confused, but open-hearted. Lonely, of course.
The first person like me I'd known.

Okay, an obvious one...but tell us a scary story!  It can be true, based on something true, or totally made up.  If you have trouble getting started, here are some more ideas, from Creative Writing Ideas for Everyone:

1. You are a high schooler in between classes. You open up your locker to find a severed head! The head has a note on it that says, "you're next!" What do you do and how do you avoid being next?

2. The zombie apocalypse has begun! Several people you know have already become zombies and now it's a game of survival. What do you do to make sure that you are one of the people left at the end of the movie?

3. If you had your choice of becoming any kind of vampire, which one would it be? A Twilight vampire, Buffy vampire, True Blood vampire, etc.? Pick one and tell your story of how you were turned and what resulted from that situation.

4. What is your favorite horror movie? What do you like about it and how would you survive till the end? Go into extreme detail and feel free to include yourself in sequel ideas as well.

Read the poem below, then consider: what role do sports play in your life?  Have you ever learned a life lesson from sports?  Maybe you think that sports are over-emphasized in our society...discuss!

If Life Were Like Touch Football
by Julie Cadwallader-Staub

Driving north on Route 2A
from Vermont to Maine
listening to the news:
—the New England Patriots coach was caught
trying to videotape the handsignals of the New York
Giants--

I remember how we six sisters
would recruit a few boys from the neighborhood
for a pick-up game of touch football in the street,
how we'd break into teams,
huddle around whomever was chosen to be qb,
how the qb would extend her left palm, flat,
into the middle of the huddle,
plant the index finger of her right hand in the center of her
palm, and then
with finger motions and whispers,
she would diagram who was to go where and when,
in order to so confuse and fool the other team
that one of us could break free
and go long.

"If Life Were Like Touch Football" by Julie Cadwallader-Staub, from Face to Face. © Dream Seeker Books, 2010. Reprinted with permission.

Steve Jobs, visionary founder of Apple who died on Oct. 5, 2011, gave the commencement address at Stanford University in 2005.  In his speech, Jobs said, "Remembering that I'll be dead soon is the most important tool I've ever encountered to help me make the big choices in life.  Because almost everything--all external expectations, all pride, all fear of embarrassment or failure--these things just fall away in the face of death, leaving only what is truly important...  There is no reason not to follow your heart."

What do you think of the way Jobs lived his life?  What would it mean to you to follow your heart?  Where would it lead?